Some time ago,  while i was forming a friendship with someone who had a very different belief system from mine, i tried to think of a way to describe an impasse we seemed to be reaching. The result is the following allegorical story. The story isn’t meant to suggest there are *only* two ways, but these two seem to be common. 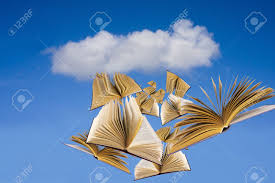 Two cloud-gazers lie on their backs in a meadow, enjoying the puffy, delightful formations above.

One has a small book with her. It contains writings suggesting how cloud formations are to be interpreted, a record that informs her gazing and inspires her complete confidence. Let’s call her Booklette.

The other relies on no such book, but rather on her own impressions of the ethereal shapes. Only her present encounter with the billowy masses enlivens her thoughts. Let’s call her Impressa.

Lovely wisps of temporary forms suggestive of animals, trees and myriad other things float by.

The two pass the time calling out the forms they see, and they find delight on the rare occasions when they see and name the same form.

Their friendship is tested by what happens when they perceive differing shapes. Wishing for more of the enjoyment of agreeing, each tries to induce the other to see in the clouds what she sees.

Booklette appeals to the writings by other cloud observers, having found satisfaction in those interpretations. Impressa has no such confidence or interest in the book, preferring instead to give credence to their present perceptions.

Conflict grows when either claims a superior view — and when either becomes more interested in expressing her view than in hearing the other’s.

Booklette’s appeals to the writings do not persuade or inspire Impressa. And Impressa is unable to sway Booklette as to the validity of her impressions because they fall outside of the scope of the source Booklette trusts.

Impressa trusts most in her experience of the here and now. Booklette finds it difficult to voice her views without appealing to the book.

When they gradually understand and accept their varying ways of seeing, they find as much delight in the differing cloud impressions as in the matching ones. And even more delight in knowing each other.